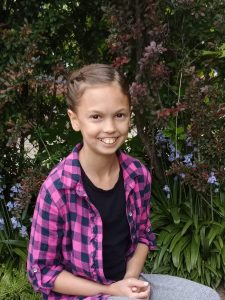 Please keep the family in your prayers as they grieve this loss.

Over the past week before Melody’s death, all of the Martin children were passing around flu symptoms to each other. Tuesday morning, Dec 6, it was Melody’s turn to wake up feeling sick, and her sickness progressed normally without concern that day. Whenever she is sick, we go on high alert but try to give her a fair chance to recover on her own before taking her to the hospital, and most times she would recover on her own. But Wednesday afternoon (the 7th) despite starting to be able to keep fluids and applesauce down, she became weaker and weaker. After taking a few steps, she would quickly lay down and pant, all out of breath like she had just dashed up and down the block. She complained of being so hot, yet her hands and feet were cold. And they got colder and colder. After supper, she said her one thumb was going numb. Obviously, her heart was not able to circulate her blood sufficiently, so Jon took her to the ER while I stayed home with the other children in hopes that it would just be a false alarm like last time (a year ago). But soon after arriving at the hospital, he sent a message saying that they took her in right away, then he said they put her on oxygen, then he said they’re preparing to transfer her to a bigger hospital. I thought, “Hmm, sounds serious, but this has happened before and she recovers with support.” But an hour later Jon sent me some chilling text messages: “Going crazy…almost lost her…pray…battling for her life”. I had all the children together so I told them immediately and prayed, asking God to take care of her, giving her into God’s hands. Five minutes later, the next message was, “Got pulse back, you should come, but it seems they are saving her at the moment.” Immediately some ladies from church came to be with the children and also take me to the hospital (they never got a chance to transfer her). In that vehicle, going through so many red lights, the one main plea was that God would allow Melody to live long enough for me to be there with her. Nothing could have prepared a mother for the sight of her daughter on an ER bed surrounded by 10-15 people vigorously trying to restore her. At that point Melody essentially was gone, but I was so grateful to be able to be there together with Jon before all hope was lost, and to be able to call her name (which she probably did not hear, but you never know), and rub her feet. Occasionally they were able to find a pulse when they paused chest compressions, and once she even bit down on the tube they had in her mouth. Sadly, after nearly 2 hours of full-blown rescue efforts, the doctors finally had to admit that there was no hope. Any words that I might use to describe the next few hours would be grossly inefficient. I will just say that the hope of heaven and seeing her there again is our lifeline. While being heartbroken, we are so glad for her that she never has to feel another needle prick or take another pill or undergo any more medical tests! The past 5½ years on her journey with systemic scleroderma, she took her health obstacles with such maturity and strength, and her whole life was lived unselfishly. It seems only right that now she gets to have perfect bliss!

Funds donated will be forwarded to Jon & Fannie Martin for medical and funeral expenses.

Excess funds can be used or redispersed by Jon & Fannie as they see fit.

Checks should be made out to Life in Christ Mennonite Church